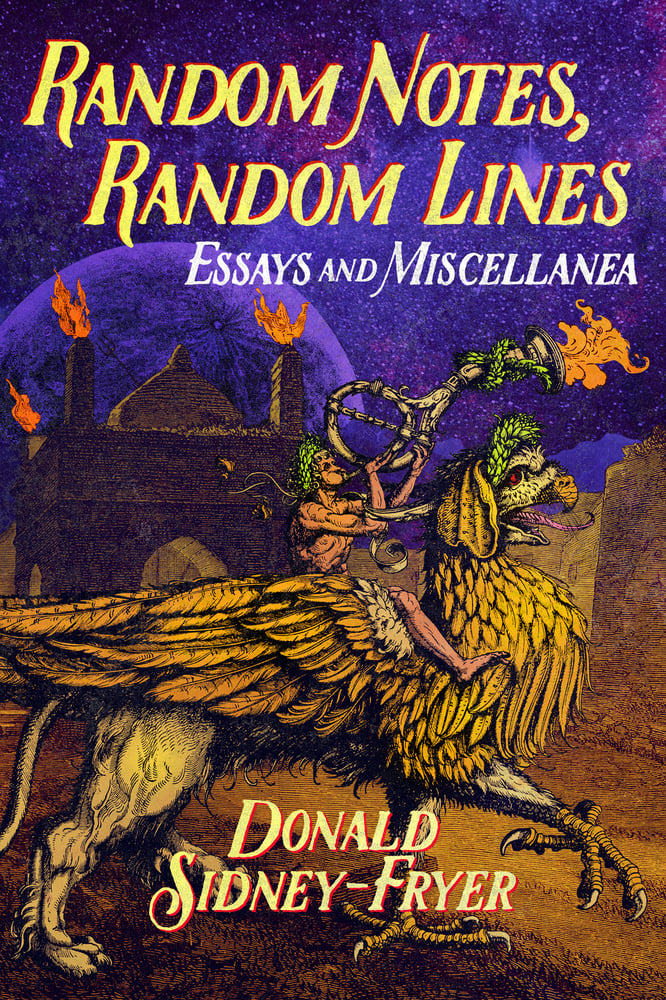 Donald Sidney-Fryer (b. 1934) has, for the better part of six decades, been a leading poet, critic, bibliographer, and fiction writer in the realms of fantasy, horror, and science fiction. His interests are prodigally vast, and every literary contribution he has made since his first publication in 1962 is vital and illuminating.

In this volume of essays and miscellany, we are treated to some of Sidney-Fryer’s most recent thoughts on a wide array of subjects. Whether it be the life and work of Clark Ashton Smith, Robert E. Howard, and Lin Carter, or the poetry of the such contemporary versifiers as G. Sutton Breiding and Frank Coffman, Sidney-Fryer always offers penetrating insight. And he writes charmingly about some of the engaging events of his own long and eventful life.

In the section “Random Lines: Poems in Verse and Prose,” Sidney-Fryer indites lyrics of impeccable beauty and metrical precision. And we are treated to a sheaf of poems written during his adolescence—poems that supply abundant hints of the towering literary figure he would later become.

Donald Sidney-Fryer, in his eighth decade of life, remains as vibrant and dynamic a writer as when he made his debut to the literary public so many years ago.

Random Notes
O Brave New Sphere!
Letter to the Editor, Crypt of Cthulhu
Bard of the Hyborian Age
The Emperor of Dreams Comes into His Own
Dreams and Damnations: A Review
The Shadow of the Unattained
A Poetic Original
A Guidebook for Witches and Warlocks
House-Guarding for Friends
A Mistress of Major Spells
Cosmic Troubadours
The Spenser Experiment
Gaspard de la Nuit and the Poem in Prose
Continuity Via Songs and Sonnets Atlantean
Brave World Old and New: The Atlantis Theme in the Poetry and Fiction of Clark Ashton Smith
Klarkash-Ton and “Greek”
A Report from Clark Ashton Smith Country
A Roundup of Recent Reviews
Interviews with Donald Sidney-Fryer
For Lin Carter