The Ettinfell of Beacon Hill: Gothic Tales of Boston 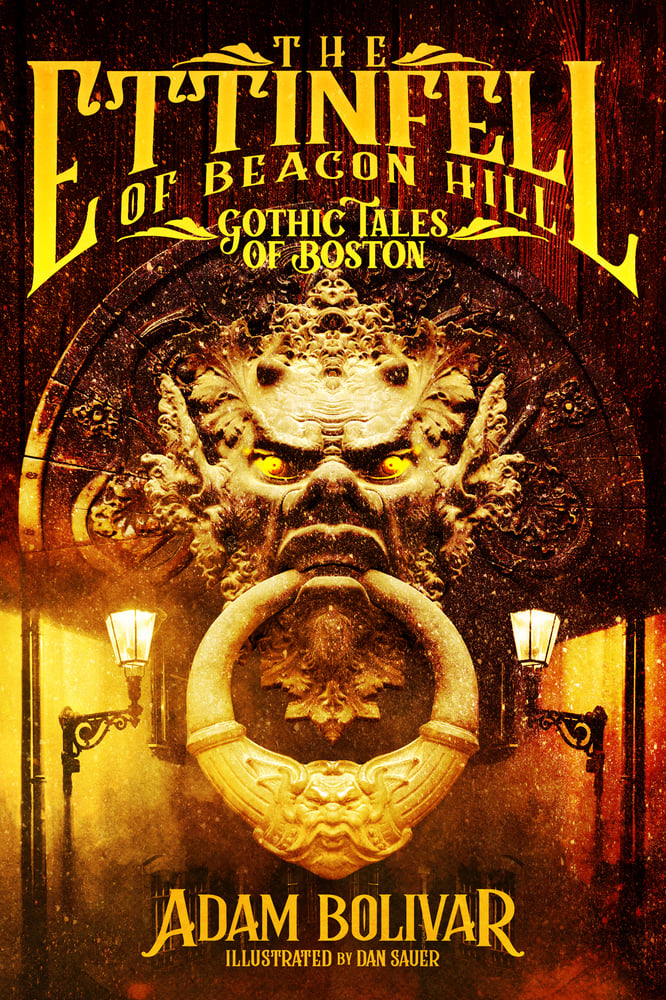 Note on signed books: If you are ordering a signed copy, please indicate in the notes section how you would like the book inscribed. Personalized inscriptions from the author are possible with preorders.

From ADAM BOLIVAR, author of The Lay of Old Hex, comes a baroque vision of flickering gaslight, occult conspiracies and decaying bloodlines. Ranging from the misty moorlands of Dark-Age England to the brick sidewalks of Prohibition-era Boston, a series of intricately interconnected stories interlaced with cunningly contrived ballads follows the path of the legendary Ettinfell—a scion of Jack the Giant-Killer—as he pits himself against a diabolical menagerie of ghouls, giants, dream-vampires, dybbuks, fauns, sorceresses, and Old Scratch himself.

JOHN DRAKE stalks the streets of 1920s Boston. He is a Brahmin by birthright, but shunned by others of his caste. Still, it is to him they must turn when caught in a supernatural snarl that needs untangling—or cutting with the rune-graven sword passed from father to son since the days of Jack the Giant-Killer. Twelve Gothic tales unfold the uncanny saga of the Ettinfell, cursed by ancestral compact to defend the city of his birth, while longing for escape to the elfin Otherworld where he can be united with the mysterious balladress whose music haunts his dreams.

Table of Contents:
I. An Apparition of the Flaming Swine
II. The North End Horror
III. The Devil in the Fens
IV. Cat's Paw
V. The Squire of Jackescombe
VI. The Black Lyre
VII. The Final Revelation of Dumah
VIII. The Labyrinth of Mr. Fox
IX. Mrs. Saltonstall's Dybbuk
X. The Enchantess of Salem
XI. An Extraordinary Visitation
XII. The Ettin-Feller's Master Stroke

“Boston has never been an unhaunted city, but with the occult investigations of John Drake, Adam Bolivar infuses the psychogeography of New England with the balladry of old weird Britain to darkly humorous, decadently erudite, and dependably ingenious effect. Part retelling, part new-minted mythos, this compass rose of tales runs roots as deep as Norse sagas and flowers with equal conviction in Copp’s Hill, the Vilna Shul, and the Land of Nod. If you thought driving downtown was tough, try the labyrinth of this captivating legendry. Only a trickster knows the true way out.” —SONYA TAAFFE, Author of Forget the Sleepless Shores

“An inventive and ambitious fusion of supernatural investigations, folk myths, nursery rhymes and fairy tales—with even a touch of the Biblical and the Mythosian. This is the line of Jack the Bold and Jack the Cursed, flickering between England and New England, flitting across the centuries, to achieve strange resolutions. Imaginative, enjoyable, and cunningly constructed.” —JOHN LINWOOD GRANT, author of Where All is Night, and Starless

“A satisfying collection of ancient horrors met and defeated by a ghost breaker in a well-realized setting in 1920s Boston. Very entertaining.” —DAVID DRAKE, Author of Old Nathan and The Serpent

“Drawing on classic British folklore, colonial legend, and a mastery of the ballad, Bolivar’s tales of supernatural investigator John Drake are frightening, whimsical, adventurous, and above all else, thoroughly entertaining! Bolivar masterfully weaves a robust and intricate world that is at times comfortably familiar and yet still uncomfortably strange. Aficionados of the genre will find Drake a welcome and unique addition to the ranks, filling a niche somewhere between Seabury Quinn’s Jules de Grandin and Manly Wade Wellman’s Silver John.” —PETER RAWLIK, Author of Reanimators,The Weird Company, and The Miskatonic University Spiritualism Club

"In The Ettinfell of Beacon Hill, Adam Bolivar is your guide through the gaslit streets of Boston, where impossibly erudite men battle back against the forces of darkness. With echoes of Wellman and Lovecraft, this collection of intertwined tales is a must read for lovers of the dark fantastical Weird" —MATTHEW M. BARTLETT, author of Gateways to Abomination

“The occult detective was once a small genre to itself and Adam Bolivar has revived it with his old-time Boston setting and a brand new sleuth. Each story is like a puzzle box found in a curio store that appeared mysteriously overnight. Tinker with solving the puzzle and opening the box, and dark, thrilling forces are released... An award-winning poet, Bolivar now offers us tales to delight fans of the fantastic.” —JOHN SHIRLEY, Author of Stormland and The Voice of the Burning House

“Adam Bolivar has already made a name for himself as a poet who combines traditional form with contemporary messages. In The Ettinfell of Beacon Hill he comes forward as a writer of prose fiction, presenting a series of loosely connected tales that draw upon Lovecraft and other writers of the classic weird tradition. We are taken from Dark Age England to the Boston of the 1920s in these engagingly written stories of ghosts, ghouls, and dybbuks. As an added treat, Bolivar interweaves some of his memorable poetry into the narratives.” —S. T. JOSHI, Editor of Spectral Realms