The Voice of the Burning House: Poems 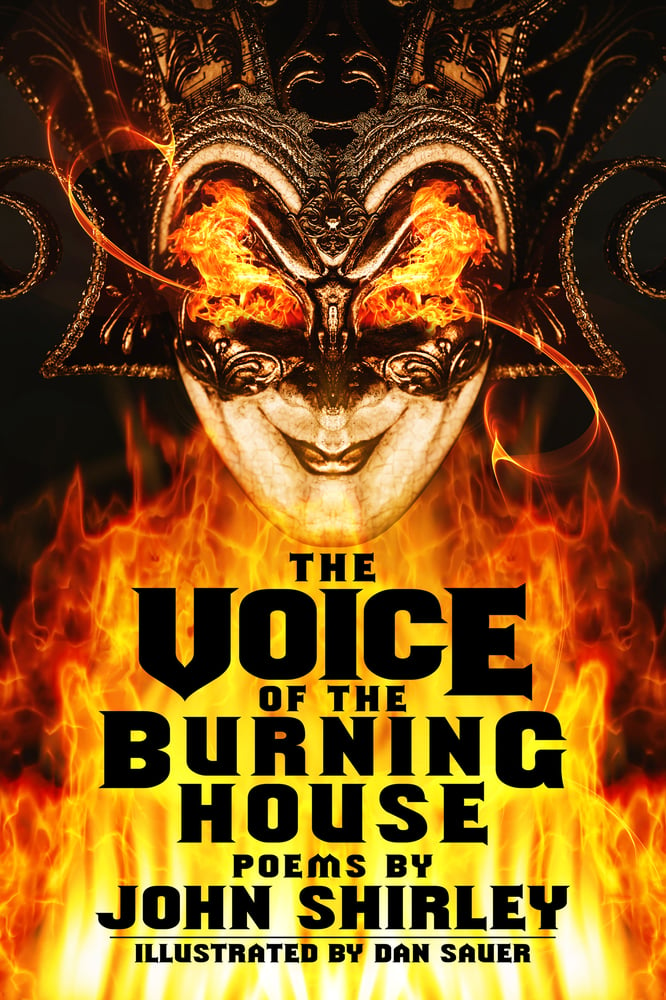 Note on signed books: If you are ordering a signed copy, please indicate in the notes section how you would like the book inscribed. Personalized inscriptions from John Shirley may be possible with preorders, but are not guaranteed. Artist Dan Sauer is available to personalize any order.

“John Shirley’s poetry is smooth and powerful. If it doesn't give you bad dreams, you're not paying attention.—TIM POWERS, winner of the World Fantasy Award and author of Last Call and On Stranger Tides

IN THE GRAND TRADITION of Clark Ashton Smith; of H. P. Lovecraft’s Fungi from Yuggoth, of Edgar Allan Poe and George Sterling and other masters of Weird Poetry...

JOHN SHIRLEY—the Bram Stoker Award-winning writer; the noted novelist, author of Demons and Cellars and Lovecraft Alive and City Come A-Walkin’ and Stormland and the A Song Called Youth trilogy and Black Butterflies; the songwriter; the lyricist for the Blue Öyster Cult... and frequent contributor to the weird poetry journal Spectral Realms—presents his first book of poems.

His themes range widely: from irony-infused cautionary tales to the dangers of romance in a vein of nightmare; to the diabolic glimpsed from the corners of the eye; to the lyricism of streetcorners; to the magic energy of inescapable regret; to cosmic horror, secret sovereigns, and apocalypse... leavened by subtle glimpses of hope.

Table of Contents:
Introductory Remarks
Spider Eggs
My Five Eyes
This Mountain of Skulls: A Song to Sing in Hell
Astarte
Flesh Flowers
The Fiddlers Unseen
A Prince in the Kingdom of Ghosts
Just Doing my Bit for the End of the World
Machen Spoke the Hidden Thing
Notice: You’re Alive
A Search for Light in Night; A Search for Dark in Day
The Cold Fog of Regret
When Rose Petals Fall
She’s a Legend
Secret Tree
It’s a Poisoned Wheel
Ten Thousand Faces
What the Madman Knows
The Devil’s in the Details
A Tourist in Hell
Wake Up and Smell the Cigarettes
You Think You Know Lonely
It’s Hell Being Your Guardian Angel
The Egregious Error of Werner Witherbye
The Sudden Raving of a Quiet One
To Live at the Edge of a Black Hole
The Ruby Light
Woodsmoke: A Folksong That Never Was
Wordless Whisperer
God is an Alien

“John Shirley’s poetry weaves haunting tales with the mesmerizing rhythm of music. Each piece will crawl into your bones, reinforced by the wonderfully startling illustrations of Dan Sauer. There are many ways to burn; I’ll take the fiery light of Shirley’s cosmic visions, with a side of sweet madness.” —LINDA D. ADDISON, award-winning author, HWA Lifetime Achievement Award recipient and SFPA Grand Master

“If true evil is a rose that sings, John Shirley’s poems are orchids that sting. Even those unfamiliar with Shirley’s legacy of songs, both from his own many different bands and the lyrics he wrote for Blue Öyster Cult, will find plenty of music in these lines, which lend them accessibility and the frisson of fear he effortlessly conjures.” —SHAUN LAWTON, Editor of the Freezine of Fantasy and Science Fiction

“It is no longer a secret: John Shirley is as talented a versifier as he is a fiction writer. The Voice of the Burning House is a vibrant, chilling, thought-provoking collection that features Shirley’s characteristic literary traits: grim, brooding horror, pensive melancholy, an awareness of the fragility and absurdity of contemporary life. But most of all, these poems—in both formal meter and free verse—evoke the terror of cosmic voids, horrors out of history and myth, and the weirdness lurking in the house next door. A volume that will repay many rereadings.” —S. T. JOSHI, Editor of Spectral Realms

“Like the skalds of old, John Shirley’s voice rings out in the dark, his words resounding with captivating rhythmic power. Turning his formidable storytelling skills towards the medium of versification, the celebrated author presents a fascinating array of poems with subjects ranging from folklore to drug use to astronomical phenomena—all threaded through with a common theme of the eternal struggle between light and darkness..” —ADAM BOLIVAR, Author of The Ettinfell of Beacon Hill

“Byronic gangster John Shirley’s singular work is distinguished by swans and knives of prose; divine menace... The many addicted to Shirley’s stunning work savor it as ground zero of the real deal; grace and sodium pentothal that autopsy and awaken; his voice shifting from satirical heresy, to heartache" —RICHARD CHRISTIAN MATHESON, Author of Dystopia and Zoopraxis