The Lay of Old Hex by Adam Bolivar 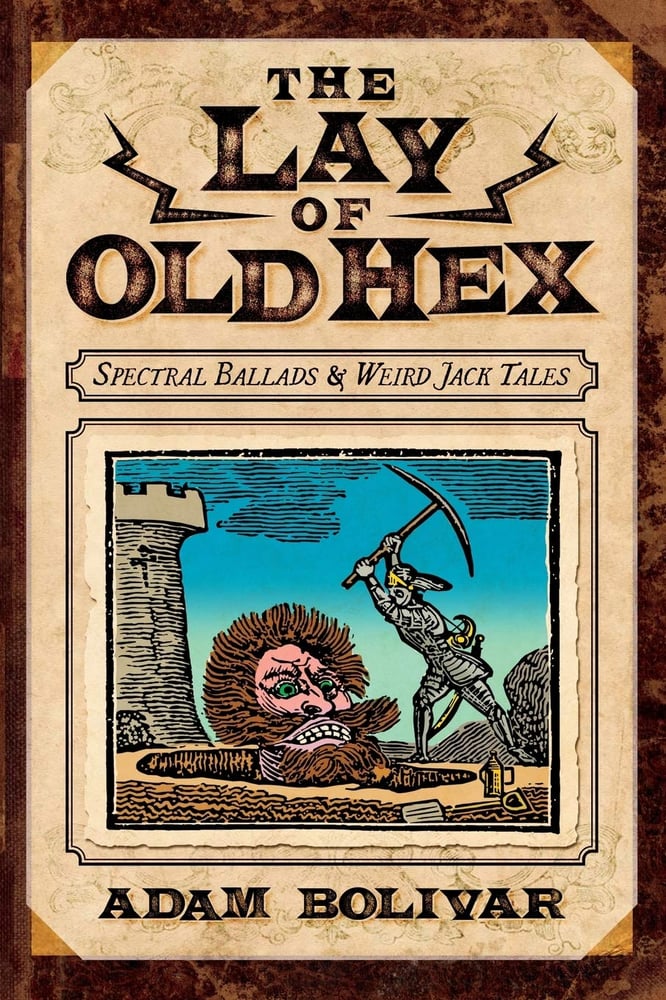 Available to be signed/inscribed by artist/designer Dan Sauer. Please specify how you'd like it to be signed in the comments section of the order form.

The ballad is one of the most ancient forms of poetic expression, and it has been used for the expression of weirdness and terror at least since the days of Sir Walter Scott. In recent years, the accomplished weird poet Adam Bolivar has lent new vitality and piquancy to this venerable literary mode.

The present volume, a masterpiece of folk horror, assembles a wealth of Bolivar’s spectral balladry, prose tales, and vignettes, telling the story of Jack Drake, whose mother gives him a Silver Key that triggers his subsequent journeys and adventures. It becomes evident that many of these adventures echo the work of H. P. Lovecraft, a dominant influence on Bolivar’s poetry, flawlessly conveying terror and strangeness in a manner that evokes both old-time legendry and contemporary cosmic horror. In one of the most powerful of his ballads, “The Rime of the Eldritch Mariner,” he fuses Lovecraft and Samuel Taylor Coleridge in reinterpreting “The Call of Cthulhu” by means of The Rime of the Ancient Mariner.

Deftly interweaving English and Appalachian traditions, Adam Bolivar’s mastery of the diction and atmosphere of the weird ballad allows him to tap into haunted undercurrents of ancestral memory, producing phantasmal effects seldom found in other forms of weird literature.

Weird poetry is thriving in our time, but it is safe to say that few poets today can match the achievement of Adam Bolivar in fashioning this rich conglomeration of hypnotic verse.

The spectral balladry of Adam Bolivar is a refreshing adaptation of the ballads of Sir Walter Scott, Thomas Moore, and other Romantic poets who found in them an ideal vehicle for the powerful expression of weird moods and imagery. Bolivar’s flawless metre and smooth-flowing stanzas create a sense of cumulative terror and strangeness easily rivaling the best work of contemporary weird fiction writers.—S. T. Joshi

Adam Bolivar emanates invocatory chants that summon us to dark worlds just the other side of the existential page. Go with him. If you don’t come back alive, you’ll at least be somewhere quite interesting indeed.—John Shirley, author of Lovecraft Alive!

Adam Bolivar’s ballads are doorways to worlds of light and darkness steeped in tradition and folklore and yet infused with a freshness and life all their own. To read his work is to journey to realms where the sunlight ever lies in pools of honey, Old Scratch lurks in every shadow, and dreams and nightmares walk the ways of Ye Yellow’d Reed.—D. L. Myers, author of Oracles from the Black Pool

Adam Bolivar’s work represents a deft fusion of echoes from folk tale and nursery rhyme with old legendry and hoary mystery. In his use of balladry, a form to which we are largely unaccustomed in this day and age, he has single-handedly forged a resurgence of the form. The Lay of Old Hex, with its mixture and interweaving of poetry and prose, and its interconnected episodes, will intrigue and delight all who appreciate the weird and wonderful in poesy.—Leigh Blackmore, author of Spores from Sharnoth and Other Madnesses

Adam Bolivar offers a unique blend of folktale, fantasy, and pure cosmic horror in this well-crafted collection. Musical yet accessible, the traditional ballad is ideal for story-telling. As Jack’s generations roll by, readers will find themselves taken with—and by—these tricksters of the silver key. High entertainment for any fan of the fantastic!—Ann K. Schwader

A thoroughly different look at the Appalachian take on English folktales, The Lay of Old Hex meanders through fantasy literature from nursery rhymes to Stephen King. Always interesting and intelligent, and occasionally brilliantly effective.—David Drake, author of Old Nathan

The Lay of Old Hex is a stunning achievement. Adam Bolivar writes what at first glance appear to be traditional supernatural ballads adhering to an archaic formalism. But they are in fact fully modern, 21st century works, moving far beyond the constraints of the last century’s almost universal free verse ethic to create wondrous visions of Gothic weirdness using every tool available to a contemporary poet, including rhyme, meter, alliteration, metaphor, allegory, musicality, mythology, and the rich and quirky historical traditions of Appalachian and Scottish balladry. Bolivar seems to have been born to resurrect the ballad as a vital force in weird literature. He comes to this task as a fully developed practitioner of his unique art. The poems are flawlessly executed, remarkably engaging, and endlessly delightful. He will be imitated, but not equaled. —David Barker, author (with W. H. Pugmire) of The Revenant of Rebecca Pascal and In the Gulfs of Dream and Other Lovecraftian Tales.

To read the work of Adam Bolivar is to enter an enchanted realm of pure poetry, where skill is combined with a brilliant imagination. Superb! —W. H. Pugmire

Come, take a journey with Jack as you read these extraordinary heroic ballads Bolivar has written with finesse. These tales will take you through haunting adventures involving eldritch mariners and Old Scratch. Come, take a seat in this rocking chair and let the Black Shepherd guide you through these macabre tales.—Ashley Dioses, author of Diary of a Sorceress

Introduction: The Lay of Adam Bolivar, by K. A. Opperman